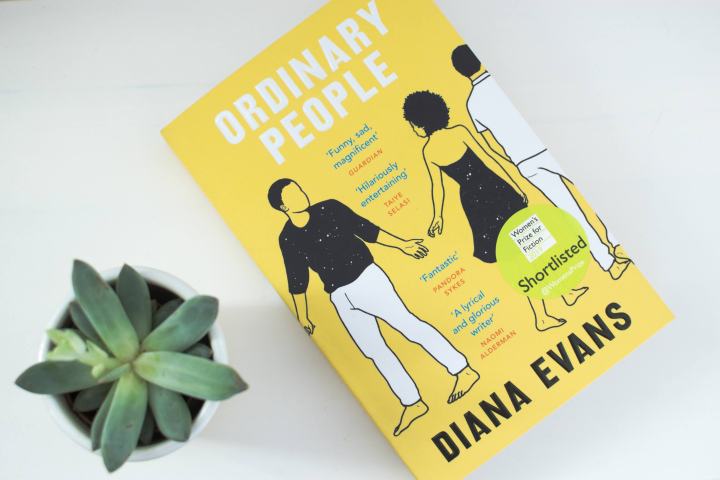 And he spent one long song in an agony of uncertainty called Ordinary People, where his love was undeniable but constantly running into hardship and there were arguments every day and no one knew which way to go.

And here I am with another blog from Women’s Prize for Fiction shortlist. Having followed the prize for years, and having read a few of the winners and nominees over the years, I’ve been blown away with the quality and the variety of the books on the list. There are so many different voices, with different stories to tell. Ordinary People really isn’t the type of book I would usually go for, but that has been the joy of reading in this way.

This was a really enjoyable and easy read, especially after Circe, The Silence of the Girls and Milkman. Of course a novel which deals with the intricacies of long-term relationships, the inevitable compromise which comes with the arrival of children and a deep look at love isn’t the most lighthearted of reads. Nonetheless I devoured Ordinary People in a few days. The writing was warm and engaging whilst the story moved at a steady pace.

The novel focuses around two couples, Melissa/Michael and Stephanie/Damien, both of whom seem to have the perfect relationship but in reality things are not so rosy. Throughout the novel we see the couples battle with the reality, and sometimes mediocrity, of their existence and the gap between this and the dreams they had for the future. Whilst some seem to thrive with this change others do not. We join their story at a pivotal moment where their futures, as individuals and couples, must be decided.

Melissa and Michael (or M&M) are the dream couple, each have had successful careers and have now settled down with their two young children. They live in a quirky house near Crystal Palace. Their once passionate romance has cooled, and Michael in particular suffers with this change. Whilst he is clearly still in love with Melisaa, and truly he has some beautiful things to say about her, a new sense of distance and coolness has descended over her which leads him to stray. He seems to be forever reaching for “a sublime plateau … the peaceful air of the ninth cloud.” For her part Melissa is struggling to remain connected to her sense of “herself” following the birth of her second child. Throughout the course of the novel you really do want these two to sit down and talk about their feelings.

Stephanie and Damien are friends of Melissa and Michael who have swapped life in the city for a family home in the suburbs. This life perfectly suits Stephanie, but Damien is finding it increasingly claustrophobic, a feeling which has intensified since he lost his father. Damien seems to obsess over the life he could have had if he had remained in the city and longs to be with a woman more like Melissa, who appears far more glamorous than his own wife.

For me it felt like the character of Melissa was central to the novel, and whilst she is a relatable and largely likeable character I felt disappointed that the other female character Stephanie was not fleshed out more. Whilst the reader had a real insight into the inner workings of Melissa’s mind this was lacking for Stephanie, she felt like a two dimensional “mumsey” type who wasn’t of any real interest to the author.

Evans weaves music throughout the book (the title of the novel is taken from one of John Legend’s best known songs) and it does provide the soundtrack to the character’s lives. The difference in musical tastes, or which songs or artists the characters associate with love perfectly demonstrates their view on romantic entanglements. I remember this particular John Legend album coming out when I was at school and all the references took me straight back to that time.

Evans has perfectly captured the malaise of long term relationships, the compromising which replaces the excitement and passion of first love. Actually this is exactly what John Legend sings about in Ordinary People, “Girl, I’m in love with you/This ain’t the honeymoon/Passed the infatuation phase/Right in the thick of love/At times we get sick of love/Seems like we argue everyday.”

Whilst love might be challenged throughout its course, the whole novel reads like a love story to music and to the city of London. The reader travels through Crystal Palace and Brixton, to the outskirts of the city. Evans clearly knows, and loves, the capital. This makes the novel feel so complex and beautifully woven. There are references to the death of Michael Jackson and the inauguration of Barack Obama, both undoubtedly important cultural moment but perhaps not so much for British culture. This felt like a little bit of a misstep to me, though it is hard to imagine which moments in recent UK history Evan’s could have focused on.

For me I enjoyed the exploration of gender relationships, class and race identity in modern Britain.

There is a supernatural and almost gothic element to the end of the story. For me this was the most exciting and compelling section of the novel. This shouldn’t fit within a novel set very much in the harsh light of reality, but it works as a narrative device which carries you through to the ending (no spoilers don’t worry).

Final thoughts: I don’t know what else to add really. This is simply a really enjoyable read.  I would really recommend Ordinary People if you are looking for an easy, quick read.