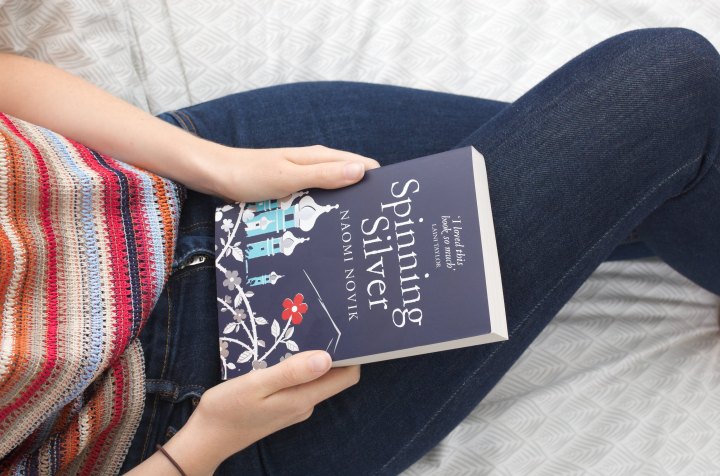 My last book of July is Spinning Silver by Naomi Novik. A wintry fairytale which was perfect for cooling down during the heatwave!

I recently shared on Instagram that I’m relatively new convert to fantasy fiction. I’d always believed that the sci-fi and fantasy section of the bookshop was just not for me. Having found myself reading more magical realism and with more fantasy books becoming mainstream I decided to go into that section and see if anything piqued my interest. Obviously it did and a new reading obsession was born. Whilst I’m still not that into sci-f I do love fantasy, lately reworkings of fairy tales or books with a mythical or fairytale feel.

And so I found myself very excited to be reading Spinning Silver. It is the story of Miryem, a young woman whose father is an ineffective moneylender. When her mother becomes sick she takes on her father’s role to pay for her mother’s medicine. She is so successful that the family begin to thrive, but she attracts the attention of the fairy king of winter, who hears that she can turn silver into gold. One of her deals sees an innocent young woman given a crown of fairy silver, which in turn causes her to catch the attention of a possessed tsar. Trapped in dangerous marriages the women unite to save themselves, their loved ones and their town from magical forces.

Spinning Silver follows the highly successful Uprooted – both are fairy tales set in what can be assumed to be Russia of old. Each see women kidnapped or held against their will, so far so traditional, but in these tales the women save themselves whilst those who would traditionally hold the power – dragons, tsars, winter knights and brutish fathers – are left defenseless and reliant upon the female protagonists.

As has been evidenced by the numerous feminist dystopian novels which have been released in recent years imaginary world provide fertile ground for recasting traditional gender roles. Traditional fairy stories are based upon these tropes – so what better what to question our assumptions and preconceptions than subverting them through familiar tales or structures. It’s something that Angela Carter achieved with The Bloody Chamber – a cornerstone of feminsit fiction to this day. Novik asks her heroines to step up, save the day (and the men folk) and choose their own destiny.

This novel has everything you could want from a fantasy novel, you have portals into another world, demons of fire and a kingdom of snow inhabited by icy people, and an epic battle to save both the human and fairy world. All this might sound a bit too fantasy for some, but the characters feel so modern, so recognisable that as a reader you suspend disbelief and become captivated.

Outside of the exploration of powerful female figures this novel deals with some important issues. For me the way Novik dealt with prejudice, particularly aimed at those of Jewish descent, which feels all too familiar.

Novik’s writing style is also a mix of modern language and a lyrical style which suits the narrative perfectly. Her characters feel fleshed out and real, she gets inside the mind of a miscellany of characters; from demons, to young women to a child. There is a reason that this novel is being nominated for awards and praised left, right and centre!

Spinning Silver is just a good, enjoyable read which romps along with the familiarity of fairytales you thought you had long outgrown. There is a very genuine comfort to be found in reading something so nostalgic. If you’re not a fantasy fan I think Novik is a great writer to start with. Give it a go. You never know you might enjoy it.

Are you a fantasy fan? Do you have some magical realism suggestions for me?