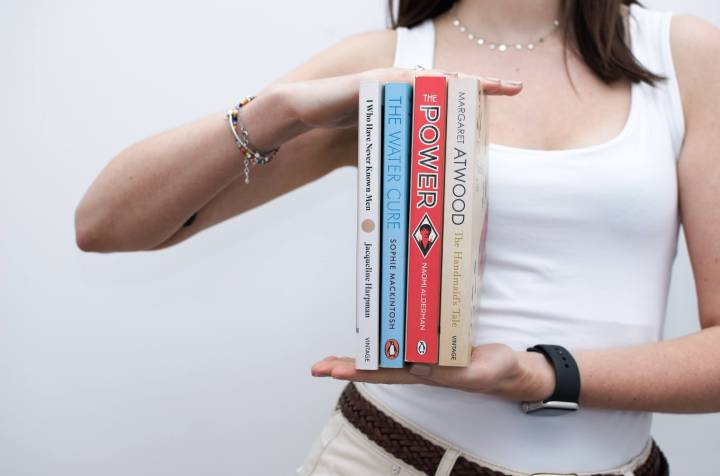 A little fact about me – I love a bit of dystopian fiction. It started with Brave New World, a book forced upon me by my Grandad when I was a teenager, and then 1984. Both very good, but neither of which completely captured my imagination.

And then at university, during a creative writing unit, I had to read The Handmaid’s Tale. And whilst I learnt a lot about the crafting of a novel, I was completely immersed in the world that Atwood had created. To me, experiencing my first taste of independence, of having a new world opened up to me, there was added terror in the idea of a woman’s life being so restricted. It was presented to me as a bit of a modern classic, but to me it felt fresh and new.

And so my love female focused, or feminist, dystopian fiction began.

I know it is a term which is bandied about a lot and it can mean a multitude of things to different readers. For me it is about a novel which shows an inequality between the genders, usually seeing women being oppressed to an extreme. Often they speak to contemporary society, exaggerating issues which are affecting women, or the concerns and problems of the time.

As these novels have also seemingly predicted the future.

In recent years the genre has become increasingly popular, leading to a slew of books in the last five years or so. Perhaps this is a comment on our unsettled and divided times?

My beloved The Handmaid’s Tale is the grandmother of the genre. The story of a society which sees women relegated to child-bearing slaves. A book which has spawned an award winning TV series (which I have not yet watched) and the iconic handmaid’s costume of red cloak and white winged hat, a symbol of political resistance.

Speaking of resistance, a common theme within the dystopian genre, my next recommendation is The Power, a speculative fiction which imagines a world in which the female population are dominant. A thought provoking read.

Next up Vox which had a very similar cover colour scheme to the two previously mentioned novels (red, black and white). A book which imagined a world in which women are only allowed to speak 100 words a day. Whilst this book had great promise, in the eyes of this humble reviewer it did feel somewhat lacklustre.

The same could be said for the next book, The Farm, a real bookstagram favourite upon its release. Once again fertility is womanised, this time in the near future we see a world in which the children of vulnerable women are destined to be given to the rich and powerful.

The Natural Way Of Things and I Who Have Never Known Men are recent reads of mine. Both are tightly woven, psychological novels which see women isolated and fighting for survival.

The Water Cure is my last suggestion and perhaps a little leftfield. The story of three women isolated on an island where desperate measures are needed to raise a daughter. The women are filled with stories of the terrible things which love can do. And then they meet men for the first time.

Keep your eyes on the blog for a review of a very special dystopian Widow Land.

And after that more books which I hope to read in the not too distant future.

Do you have any suggestions for books I should be reading in the genre? What do you think will be appearing in my blog on feminist speculative and dystopian fiction that I hope to read?

3 thoughts on “Feminist Dystopian Fiction Part One: My Story So Far”